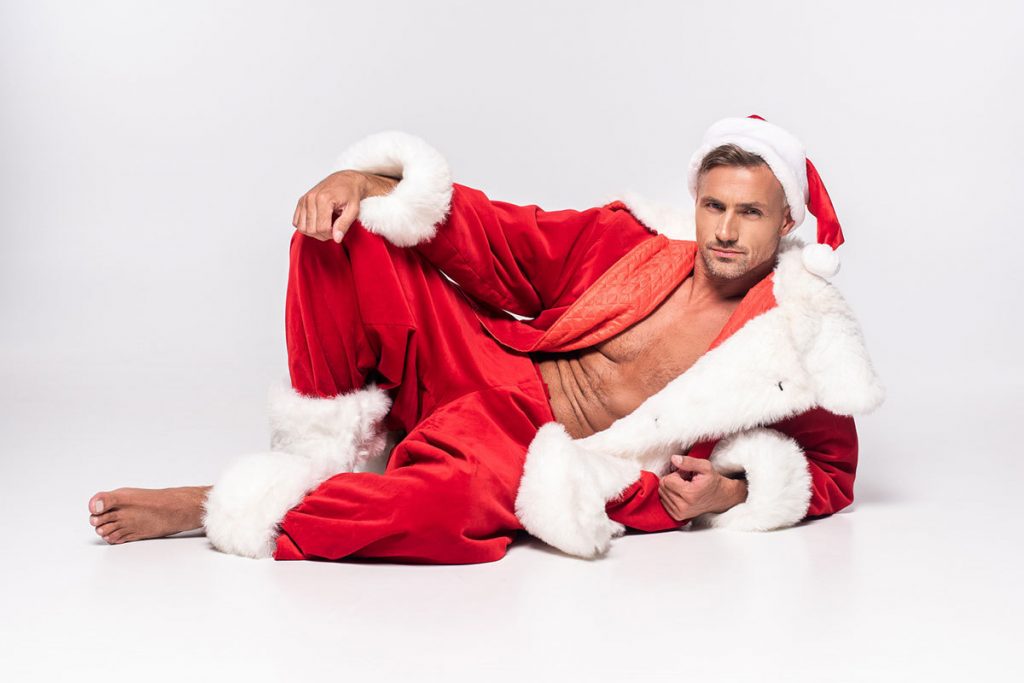 Christmas is almost here, and between last minute shopping, wrapping gifts, and preparing for family to arrive, we’ve been spending some time thinking about everyone’s favorite man in a suit: Santa Claus.

Santa’s famous face has been bringing joy to people all over the world for hundreds of years, and his iconic look is instantly recognizable. But what if his belly didn’t shake like a bowl full of jelly when he laughed? What if he could go back to a time where mommy wanted to kiss him under the mistletoe and he inspired Eartha Kitt’s sultry Christmas classic?

To have a little fun for the holidays, we put our heads together and came up with the perfect treatment plan to help Santa look a little sharper (and maybe even rekindle romance with Mrs. Claus!).

We have to admit Santa’s looking pretty good considering he’s 1,700+ years old—that said, he may benefit from some choice cosmetic treatments.

Dad bods may be in, but Santa’s been over-indulging in sweets for years—and his love handles are making it tricky to squeeze down the chimney.

Dr. Reedy’s Rx: “I’d recommend Santa come in for a few sessions of CoolSculpting non-surgical fat reduction to slim down bulges around the abdomen. We have two CoolSculpting machines so we could treat both sides at the same time, but he’d really need multiple treatments to see good results—and commit to following a Mrs. Claus-approved diet to sustain those results until next Christmas. If CoolSculpting isn’t quite enough for Kris Kringle to squeeze through tight spaces, I may suggest Smartlipo TriPlex for more dramatic sculpting, and this option would have him back to work at the workshop within about three days.”

Take the old out of “Old St. Nick” with BOTOX & fillers

Santa’s been at it for a while—and his face is starting to show the years. We have to admit that he’s looking pretty good considering he’s 1,700+ years old, but that’s no reason to avoid the benefits of BOTOX. Besides, it’s known to make people look even more jolly.

Part of Santa’s charm lies in his warm, grandfatherly appearance, so I would conservatively use BOTOX to soften his smile lines and forehead creases while retaining a mature look.

Dr. Reedy’s Rx: “Part of Santa’s charm lies in his warm, grandfatherly appearance, so I would conservatively use BOTOX to soften his smile lines and forehead creases while retaining a mature look. While his waist may have expanded, it’s common to lose fat in the face as you age, and Santa is well known for his full cheeks. A small amount of dermal filler strategically placed in the mid-face will help him retain his youthful look.”

Weather at the North Pole isn’t kind to skin, and Santa’s been battling dryness, spots, and dullness. We’ve come to expect a rosy glow from the man, so winter skin needs to go.

Dr. Reedy’s Rx: “Laser skin resurfacing would be a fantastic option for Santa, as it would help rid his face of old, dead skin cells and allow his famous roseyness to shine through. The tundra of his home also likely leaves him open to sun damage, so I may include a FotoFacial to reduce sun spots and other skin irregularities while smoothing the appearance of lines.”

Santa Claus makes his big debut one night a year, but he works hard 365—and we bet self-care doesn’t top his list. To cap off his new look and get him ready for a long night, the team at Lords & Ladies Spa can give him finishing touches.

Dr. Reedy’s Rx: “After we’ve finished, I’d send Santa to Lords and Ladies for a relaxing massage, a manicure to give his hands and nails some TLC after long days making toys, and a hair and beard trim to help him look his best.”

Happy holidays from your friends at Berks Plastic Surgery! We hope your season is full of warmth, great times with loved ones, and, of course, lots of laughter.